Breeding programs and detailed studbooks are not only established for mammals, so that genetic diversity at a European level – or even a global level – can be kept as high as possible. This is also happening more and more for fish. Two Antwerp bluespotted stingrays, Taeniura lymma, have therefore been shipped to Hong Kong. ZOO Antwerp does very well in breeding with the species. The Antwerp bloodline is already strongly represented throughout Europe. “That is why we are now sending our young rays further afield, such as to Ocean Park in Hong Kong.” The species is endangered in nature, partly because their habitat, the coral reefs, is under great pressure. It is important that zoos know how to breed these animals and how to keep them in optimal conditions," explains Philippe Jouk, marine biologist at ZOO Antwerp & ZOO Planckendael.

ZOO Antwerp breeds very well with blue-spotted stingrays, a fish species that is under great pressure because the coral reefs where they live are threatened. The species is quite widely distributed in the Indo-Pacific ocean, where there are coral reefs. Coral is threatened worldwide by local effects such as pollution from waste or microplastics, toxins, overfishing and illegal collection of coral. In addition, there are global effects, including climate change-related warming and ocean acidification. The rays in the ZOO Antwerp aquarium are part of a European breeding program. At the request of the coordinator of the breeding program, two young rays – each about 20 centimeters long without tail – were shipped from ZOO Antwerp to the aquariums of Ocean Park in Hong Kong. International breeding programs ensure that populations in zoos and public aquariums are not managed locally, but are managed collectively, so that the genetic variation of the animals remains as wide as possible. In the case of fish in Europe, collectively means at the level of EUAC (European Union of Aquarium Curators) and EAZA (European Association of Zoos and Aquaria) together.

In ZOO Antwerp, two adult female rays live in the large coral reef aquarium, and one male ray. The three animals live in ideal conditions. Therefore, they reproduced well. “From the start of housing these animals in this large reef aquarium, we were recommended to breed them,” says Philippe Jouk, marine biologist at ZOO Antwerp & ZOO Planckendael. “Because it works so well, the Antwerp bloodline is already very well represented in Europe. We are looking at where the animals can be put to good use, in function of the worldwide management of the population. In this case, it is recommended to send new youngsters outside of Europe.”

How did the project unfold?

Transporting bluespotted stingrays is not that difficult. But in this case, the duration of the trip was a huge challenge. The young animals had a journey of at least 48 hours ahead of them. ZOO Antwerp therefore tested beforehand how the animals could best be shipped and especially how the water could be heated, because the cargo space of an aircraft is much too cold with temperatures between 14 and 18 degrees. “The animals are shipped as standard in an insulated polystyrene box. Inside were another in four different plastic bags, filled with a third seawater and a two thirds pure oxygen. The pure oxygen serves to keep the oxygen concentration in the water high throughout the journey. Ordinary air is sufficient for short journeys, but pure oxygen is required for long journeys, otherwise the oxygen content will drop. After all, the animals are in a completely closed environment for the entire journey. The cargo space of an airplane is much too cold for these tropical animals, so the earlier test showed how much extra heating was needed," Jouk continues. “There are special 'heat packs' available: these are bags with a chemical product that are activated just before departure and stuck to the lid of the polystyrene box to maintain the temperature for 48 hours.”

An additional challenge was the stingray's spine at the base of the tail. There was a danger that they would puncture the bags they are in, causing them to die on the way. “So we had to find a solution to make sure that sting could not cause any problems. We have learned that placing a piece of foam on top is ideal so as not to puncture the bag.” The whole operation went well. The animals have arrived safely. And the water values on arrival turned out to be very good. This also teaches us how efficient our transport was. As mentioned, the fish have to make do with the conditions we create in the transport bags before departure. The water parameters must be and remain good. We are not only talking about the temperature and the dissolved oxygen content, but also about the waste products that the animals produce, which pollute the water. This is because faeces increase the toxic ammonium content, and the CO2 from the respiration causes acidification of the water. “By no longer feeding the animals a few days before departure, we ensure that their intestinal tract is empty when they leave, so that no more faeces are produced. If necessary, the acidification can be compensated by adding chemical products, but that was not necessary in this case.”

What impact does the project have?

The threat to coral reefs in the world's oceans, including local pollution and global warming, is a well-known phenomenon. “If the coral reefs deteriorate, it is also normal that all the inhabitants who live with them deteriorate, or even disappear,” concludes Jouk. All animals that live in those reefs will therefore be increasingly threatened, just like the blue-spotted stingrays. That is why it is important that zoos know how the animals live, how they are best kept and under what conditions they breed best. Maintaining genetic diversity is also very important, because sufficient genetic diversity is an important condition for the survival of a population or a species. That is why the breeding of the animals is closely monitored in studbooks."

This species is "sensitive" for the IUCN, an organization that monitors the status of animals, due to the widespread degradation and destruction of coral reefs, local fisheries and pollution. The breeding program was set up jointly between EUAC and EAZA. A total of 59 aquariums in Europe participate. Breeding success has so far only been achieved in 15 of the participating aquariums. The ZOO Antwerp aquarium is one of the successful breeders. But the consequence of breeding well in such a population is that your bloodline will spread quickly, and the studbook keeper should take this into account. Although it is a European studbook, the studbook keeper is also in contact with colleagues in America and Asia. And because there were no animals of our bloodline in Asia yet, it was appropriate to send these two young males there. Due to the success of the breeding program, almost 70% of the bluespotted stingrays in the participating European aquariums are now aquarium born. 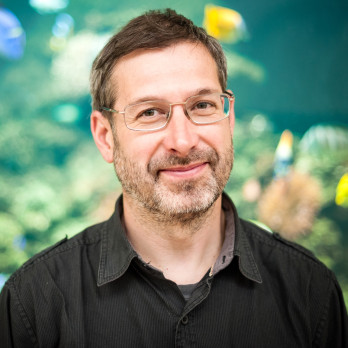